1. More than Half of Companies Measured Employee Engagement in the Past Year

2. Most Companies Have Measured Employee Engagement for Multiple Years

There is growing interest in measuring employee engagement more frequently than once a year by using monthly, weekly, or even daily pulse surveys. We asked HR leaders: “How frequently does your organization conduct a formal employee survey or collect employee feedback?” Multiple answers were allowed to determine if companies complemented an annual survey with pulse surveys. The most frequent response was “annually” at 49 percent, showing a slight decrease from 2016 at 52 percent. The largest increase was among “always-on” surveys, which jumped from three percent in 2016 to 11 percent in 2017. “Every two years” was the second-most-reported choice at 19 percent.

The reported use of online employee engagement surveys increased from 46 percent in 2016 to 68 percent in 2017. Correspondingly, paper survey administration decreased from 19 percent to 10 percent during the same time.

Companies report good participation in their employee engagement surveys with more than a third receiving feedback from 90 percent or more of their employee population. Only 24 percent reported less than 70 percent of employees completing their last employee survey. The average participation rate of 77 percent was two percentage points higher than last year.

We asked companies, “According to your most recent survey results, what percentage of employees are engaged at your company? This includes employees you consider to be fully engaged, engaged, or somewhat engaged.” The average level of employee engagement increased two percentage points from 66 percent in 2016 to 68 percent in 2017. 34 percent of companies reported engagement levels of 80 percent or higher.

Measure and improve employee engagement with confidence by partnering with the experts. 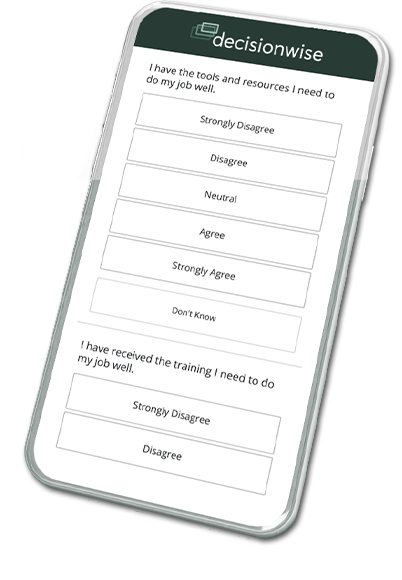