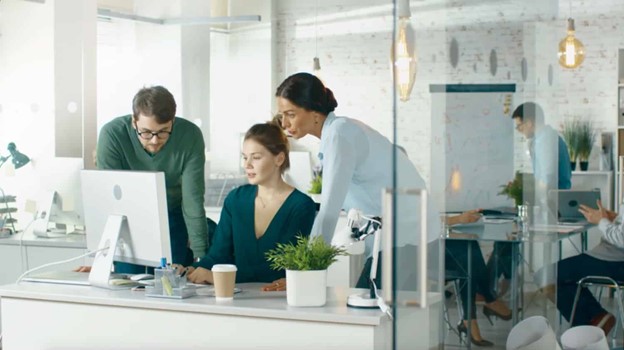 We’ve been conducting 360-degree feedback surveys and coaching on the results for a long time—since 1996, to be exact.  During this time we’ve figured out the best methods for using 360 surveys to get the biggest bang for your buck while avoiding the most common pitfalls.

This white paper provides start-to-finish advice for organizations that are looking to implement the process as well as those that have conducted 360 surveys for many years.  The information is organized based on 12 of the most common questions asked by our clients: 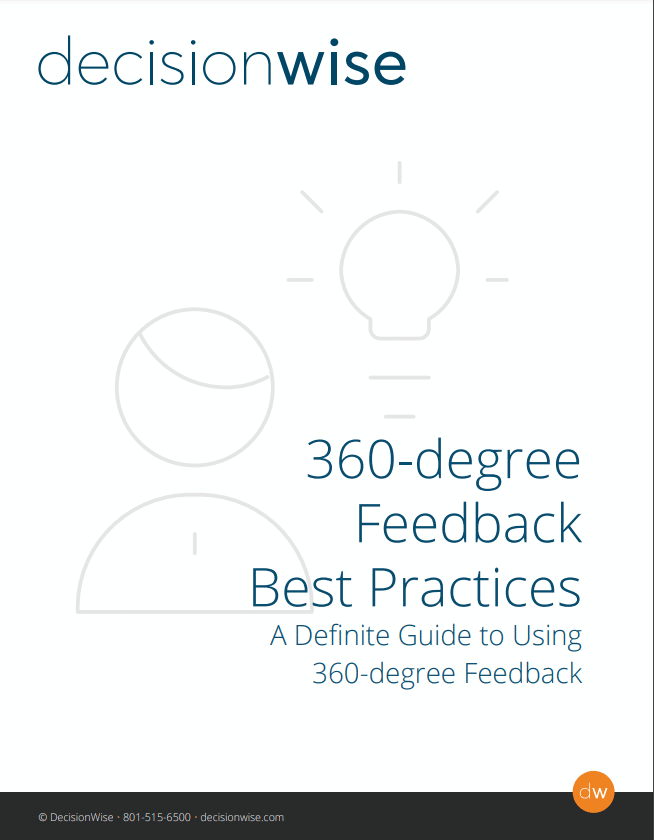 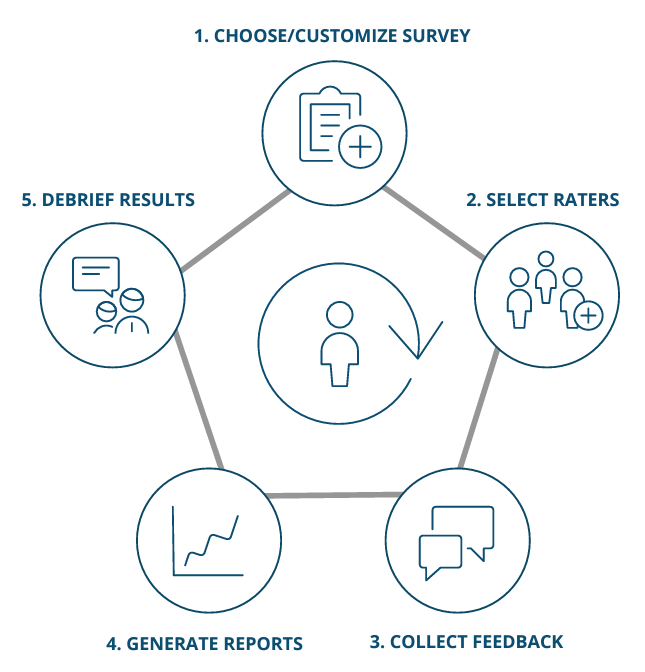 HOW DOES 360-DEGREE FEEDBACK BENEFIT A LEADER?

Some leaders question the idea of conducting a formal 360-degree feedback process. They might say, “If I want feedback from others, why wouldn’t I just ask them? The problem is that most leaders don’t ask for feedback that they need; if they did, people would not be as candid or comprehensive in their feedback as they can by using a 360 survey. Multi-rater assessments provide a safe way for others to provide open and honest feedback across a broad spectrum of leadership competencies and behaviors. They reduce the emotional and political barriers that people feel to provide constructive information to a boss or peer.

Sometimes the fear of the unknown intimidates people who want to begin the process. They ask, “What if people use the 360-feedback process to get back at me?” The truth is, people do not use the feedback process maliciously. On the contrary, they understand that by providing feedback they are investing in the leader’s development and are more willing to provide support.

WHAT SHOULD BE MEASURED?

Well-structured 360 surveys are best used to measure against specific leadership competencies and behaviors that are critical to an individual’s success (or failure). Most surveys include 8-12 competency areas that include a total of 60-80 specific behavior statements to rate.

We also recommend using a short section to evaluate leadership derailers, which are negative behaviors that are detrimental to leadership success. Read through the survey items to make sure they are relevant to the leaders in your organization. That said, organizations often arrive at an interesting crossroads: the decision to use a standard 360 survey or to customize a survey based on the organization’s specific leadership competencies.

CUSTOM 360 SURVEYS are recommended for organizations that already have leadership competencies in place and want to provide feedback to all leaders in the organization. Multiple versions of the 360 survey can be developed for different levels of leaders (executives to team leaders). This option will cost more, but it will provide a relevant tool that can be used for years to come.

STANDARD 360 SURVEYS are great because they have been tested and validated, provide benchmark comparisons, and typically measure a broad range of leadership competencies. Because they don’t require a customization fee, a standard survey is a good option for small groups or for organizations with no formal competency model in place.

WHAT ABOUT LEADERSHIP DERAILERS?

A derailer is a behavior that gets in the way of optimal results. A derailer is not just a weakness. We all have many weaknesses that we may not need to develop to succeed. A derailer is a weakness that requires improvement if we are to realize our full potential. Some examples of leadership derailers include the following:

We recommend using a set of 10-12 derailers as a separate section of the survey because the statements are negatively worded and the rating scale is different. The derailer section helps to identify bad behaviors that may not appear in the other competency areas. It also helps to identify patterns in the feedback. For example, if leaders show an inclination to micromanage or towards perfectionism, they tend to also score high on results orientation or planning and organization.

We recommend using a seven-point Likert rating scale on 360-degree feedback surveys. Why? Because a seven-point scale provides a wider range of responses, making it easier to see gaps in perception between rater groups.

WHAT IS THE BEST WAY TO COLLECT QUALITATIVE DATA?

We’ve found that two or three open-ended questions still provide abundant feedback and help provide clarification to the quantitative responses. Here are two questions that we like to use:

HOW SHOULD RATERS BE SELECTED?

We recommend that the participant (the one receiving the feedback) be involved in deciding who will be asked to take the survey. This allows the person to feel more invested in the process and accepting of the results. Ideally, the participant meets with his or her manager to come up with a list of raters with the manager providing final approval. If the participant is not involved when selecting raters, they are more likely to discount the results of the survey.

We recommend selecting between 8 and 15 raters, with a minimum of 3 in each rater group. Rater groups typically include the following:

Be sure to include all direct reports, even if this is a large group. This way, no one feels excluded from the process.

Yes, please! Unless you take your own survey, you can’t compare your self- perceptions to those of others. Seeing discrepancies between how your supervisors, peers, and direct reports see you versus how you see yourself it he most eye- opening and developmental aspect of 360-degree feedback.

HOW DO RATERS PROVIDE HELPFUL FEEDBACK?

Raters (those providing feedback) should always receive some instruction on how to give good feedback. This helps to ease any concerns about the process and ensure that the feedback is constructive and helpful for the participant. Feedback should be relevant and actionable. When preparing raters to provide feedback, ask them to do the following:

Also make clear that their responses are confidential and are averaged together as a group. No individual scores will be shown on the report except for those provided by the manager and the participant.

HOW CAN THE FEEDBACK PROCESS BE KEPT CONFIDENTIAL?

Confidentiality is the most important part of the 360-degree feedback process. In order to collect honest and candid feedback, raters need to be assured that their feedback will be kept anonymous. Here are the best ways to maintain confidentiality:

SET EXPECTATIONS: Communicate about the process, who will participate, and who will see the results.

OUTSOURCE THE PROCESS: If you run the 360 process internally using an online software tool, employees are more likely to believe that their responses can be seen by HR or their manager.

SELECT ENOUGH RATERS: Make sure that you have enough raters in each rater group to provide an aggregate score. We recommend at least two responses per rater group to show results. That means each group should have at least three raters, in case one person does not respond.

WHO SHOULD SEE THE 360 FEEDBACK REPORT (BESIDES THE PARTICIPANT)?

If you are using 360-degree feedback in your organization for the first time, we recommend that the individual report be provided to only the participant and a coach (internal or external). This will help quall any fears about confidentiality and the results being used in a punitive way.

To ensure accountability, set expectations that the participant will need to talk with his or her boss about the action plan that they will create as a result of the process. In future years, inform everyone involved if you will share the individual report with the boss or others in HR.

WHAT IS THE MOST EFFECTIVE COACHING PROCESS?

Ideally, the participant should meet for about 90 minutes with an internal or external coach to review the results and create a personal action plan. This ensures that the feedback is interpreted correctly and the participant has an accountability partner with whom to discuss ideas. This coach can help the person process emotions and gain clarity on how they are perceived by others.

WHAT IS THE BEST WAY TO FOLLOW UP WITH RATERS?

When others give feedback using a 360-degree survey, they become involved in the participant’s process of improvement. They invest time, energy, and thought into the feedback they provide. That’s why it is important for the participant to thank raters for their feedback, acknowledge what is working and what is not working, and ask for their help in reaching development goals.

Raters are more likely to continue to support the person’s development when they are personally asked to participate, they see that the person acts on their feedback, and the person follows through with them afterwards on his or her commitments.

Honest and reliable feedback is necessary to test one’s own perceptions, recognize previously unseen strengths, and become aware of blind spots in one’s self-perceptions. This new self-awareness acts as a catalyst to promote personal development and change. The outcome of the process is to create a personal development action plan.

Bottom line, 360-degree feedback is the best way to start a personal development journey, change habits, improve relationships with others, and become a better leader.